Norberto Jose Sandoval Villalobos is North Catholic Parishes’ Associate Pastor. Norberto was born in Maracaibo City, Venezuela to a small family that included his parents, older sister, and brother. Today Norberto is an Uncle to his brother’s two children.

Norberto graduated from the University of Zulia in 1993 in Journalism, Public Relations, and Advertising specialization. Three years later, Norberto’s life would change drastically. “It was 1996 when I heard about Milwaukee, Wisconsin for the first time. Father Robert Stiefvater came to visit my hometown looking for Vocation interested in studying for the Milwaukee Archdioceses.”

While priesthood had never really been on Nortberto’s radar, he found inspiration in a Holy source. “I did some journalism work on St. John Paul II when he came to visit Venezuela and it helped me think about the possibility of becoming a priest.”

A year later, Norberto was invited to Milwaukee by St. Francis Seminary where he began his voyage to priesthood. While such a sudden change can be scary, Norberto found faith and guidance in his new life and has felt the glory of God ever since. “I spent three months out of my country to become familiar with St. Francis de Sales Seminary and Milwaukee culture, and I fell in love with both! On September 21st, 1998 I left my country, my culture, my language, and my family to follow Jesus and became a student of St. Francis de Sales Seminary. Seven years later after finishing my English, Philosophy, and Theology studies I became an Ordained Priest for the Archdiocese of Milwaukee on May 21, 2005, the greatest day of my entire life!”

Norberto feels he was called by God to serve the North Catholic Parishes community in Sheboygan. His new family is his favorite part of being involved with the church. “Eight years ago I came to the Sheboygan North Catholic Parishes and it was a hard time for me to decide where I wanted to go. I moved around a few parishes before God asked me to come back to Sheboygan. I gave Him control of my life and put my faith in Him leading my journey and He did it! My favorite part of being here is that my new family is bigger here than in Milwaukee.”

Outside of his call to the priesthood, Norberto proves that priests enjoy fun hobbies just as much as everyone else, including collecting memorabilia from his favorite brands. “I was eleven years old when I started my Coca-Cola collection. Venezuela was a Pepsi country for many years, and it was very hard to find Coca-Cola.” Norberto is also fond of photography, having worked as a professional photographer in his past and submitted his work to galleries as well as freelance work for weddings, communions, quinceañeras, and social events.

Norberto also takes on extracurricular activities of faith to build upon his priesthood. “One of the organizations that I have been involved with as both a seminarian and as a priest is Knights of Columbus. I am a Four-Degree Knight and I am currently the Chaplain for the Our Lady of Guadalupe Knights of Columbus Council in Milwaukee. I was also the chaplain of the Pere Marquette Four-Degree Council. It allowed me to learn and understand the organizations that I never heard about it living in Venezuela.”

Norberto welcomes anyone and everyone of all backgrounds to come and experience God through North Catholic Parishes. He hopes for their experiences in the church to become part of their everyday lives. "People should have the experience of God anywhere they are or want to be. If you live in Sheboygan, believe in God, and have the desire to experience God, come to the Sheboygan North Catholic Parishes. St. Clement, St. Dominic, and Holy Name of Jesus always have the door opened for those who would like to worship God and be part of a great community.”

Norberto also doesn’t want visitors to be afraid of their faith, welcoming them to come celebrate in unity. “There are many people that call ourselves Catholic, but there is a fear to belong. Leave your fear behind and be part of the greatest experience of God’s love!” 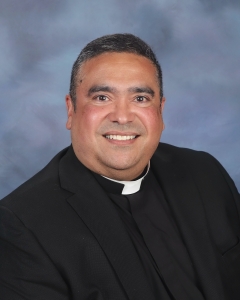